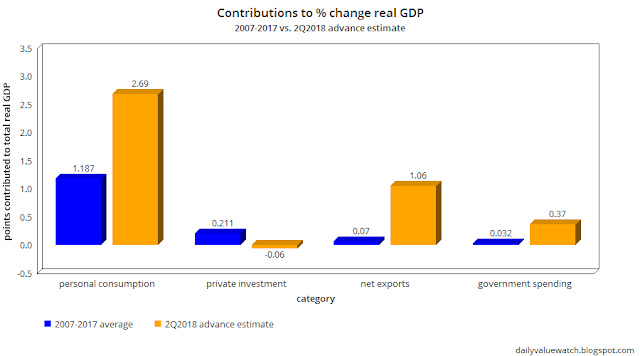 Compared with the average from 2007-2017, the points contributed to real GDP in 2Q2018 by private investment plunged 128%. It was the only category which actually subtracted from real GDP (-0.06 vs. an average contribution of +0.211 from 2007-2017, which includes the subtractions of the Great Recession era).

And speaking of fuel, the biggest gainer percentage-wise was net exports (oil), its contribution up a whopping 1414% over the previous period average. That's great for the oil business, but consumers are paying over three bucks a gallon for gasoline today. A lot of the personal consumption increase (above) is going straight into the fuel tank.

That's a neat trick of GDP. Export a commodity needed at home, driving up the price which consumers pay, and then the government turns around and counts consumers' misfortune as a sign of a growing economy! Yeah! Reelect the president!

Finally we have the contribution from government expenditures and investment, also up in a huge way, 1056% over the previous period average contributed (which includes all of Obama's stimulus). We needed the big increase to defense spending, to be sure, but that's for maintaining the possibility of increased standards of living. It's not the same thing as an increased standard of living.

Cue the happy talk. Surely it's five o'clock somewhere.
Posted by JM at 11:19 AM