Finally, I would simply add that the new partnership between our people spans the spectrum, from space to science to sports. I think, President, you're aware that recently I welcomed to the White House a group of young Russian basketball players -- both boys and girls -- who were visiting the United States. We went on the White House basketball court, and I have to admit some of them out-shot me. (Laughter.) They represented the hope for the future that brings our countries together.
Those were the same hopes of another generation of Americans and Russians -- the generation that stood together as allies in the Second World War -- the Great Patriotic War in which the Russian people suffered and sacrificed so much. We recently marked the 65th anniversary of our shared victory in that war, including that historic moment when American and Soviet troops came together in friendship at the Elbe River in Germany.
-- Barack Obama, June 24, 2010 (transcript here)
"The term is not generally used outside the former Soviet Union" (Wikipedia, here), except, apparently, by aficionados.
Posted by JM at 2:24 PM

According to The Associated Press:
Gross domestic product rose by an annual rate of 2.7 percent in the January-to-March period, the Commerce Department said Friday. That was less than the 3 percent estimate for the quarter that the government released last month. It was also much slower than the 5.6 percent pace in the previous quarter.
Posted by JM at 11:53 AM

"The development of a tradition is as unthinkable without some initial innovation as the progress of an innovation is apart from its regularization in one."
-- Imam John
Posted by JM at 7:13 AM

THE LEADERSHIP WE DESERVE

CONGRESS OF IDIOTS BAILS OUT THE STUPID

My favorite line from the following is "but it will help keep . . . I slightly above poverty level." Just how people who talk that way end up accumulating such large sums is something of a puzzle.
From "Retroactive Nonsense" by Thomas Brown, here:
[S]ometimes a proposal is so idiotic, so misconceived, and so harebrained that it’s impossible to ignore. In Washington yesterday, House and Senate conferees on the financial regulation bill agreed on one such nutty item, when they voted to make retroactive the increase in the FDIC’s insurance limit, to $250,000 from $100,000, back to January of 2008. . . .
What can these people be thinking? Congress’s move yesterday—which essentially bails out 8,700 ex-IndyMac depositors who were stupid enough to have more than the then-FDIC limit on deposit there—aren’t poor downtrodden souls who’ve been screwed by the system. They’re rich. Each has more than $100,000! Some of them, a lot more! They’re so wealthy, in fact, they could afford to let that much money languish earning passbook rates. In the long and unseemly line of bailouts that have happened as the credit crunch has progressed, these are the last people—the very last people—who should be granted a special, surprise place at the federal trough.
But instead, our idiot representatives feel sorry for them. Is there no minimum level of personal responsibility Congress won’t insist that people, or at least wealthy people, accept?
Apparently not. Meanwhile, if the group the Los Angeles Times talked to yesterday is any indication, the beneficiaries of this new windfall are a bunch of pathetic fools.  “It’s nothing to the government,” one of them, a retiree name[d] Craig Phinney, rationalises, “but it will help keep my wife and I slightly above poverty level for a couple of more years.” Uh-huh. Actually, the move will cost the Deposit Insurance Fund around $200 million. And Mr. Phinney, if you’re really so concerned about staying above the poverty line, why not take a moment (and it won’t take much more than a moment) to learn about how federal deposit insurance actually works? It’s pretty common knowledge that there are limits to coverage. Nor was it any secret that IndyMac was a shaky institution before it was finally seized. If you’re so close to the poverty line, why did you have so much money at IndyMac in the first place?
In the meantime, the moral hazard that Congress’s move yesterday creates is not unsubstantial. I can’t imagine why large depositors won’t be more willing now to shop for yield at institutions they know are less than completely sound. Then, when one fails, depositors will point to the precedent set yesterday and demand that they, too, be made whole. So at the margin, the conferees’ vote yesterday will make the financial system less strong rather than more so. This is reform?
You’re thinking that I’m being too tough on Congress and the hapless depositors it’s helping. No. The government has bailed out the automakers. It’s bailed out big banks. It’s shoveling stimulus money in order to bail out the states. Now it wants to bail out people who have so much money already that their bank balances exceeded FDIC limits? It’s insane.
Posted by JM at 10:44 AM

The taxpayer-backstopped Fanny and Freddie, of course:
The Obama administration is continuing one of the more horrific policies of the Bush administration: Using the GSEs as a back door bailout for the rest of the banking sector: These banks are selling their garbage to the GSEs — and according to some anecdotal evidence, are getting pretty close to full boat (100 cents on the dollar) for these bad loans.
Hence, Fannie and Freddie have become a dumping ground for all manner of bad bank loans.
The GSEs have had their own problems over the years — accounting fraud, recklessly chasing market share, lowering loan quality, etc. — but they have now become . . . the last stop for every crappy mortgage ever written.
Ritholtz has more here, on the story from Bloomberg.
Posted by JM at 6:38 AM

From the takes one to know one department, 79 year old Daniel Ellsberg is saying Obama is deceiving the public.
After the 89 year old Helen Thomas caused a kerphuffle just days ago with some choice words for the Jews, it's starting to look like Demented Geezer Eruption Week. Trouble is, Ellsberg is on to something: the dissimulation that lies at the heart of everything about this president.
From Der Spiegel:
SPIEGEL ONLINE: What about Afghanistan? Isn't that a justifiable war?
Ellsberg: I think that there's an inexcusable escalation in both countries. Thousands of US officials know that bases and large numbers of troops will remain in Iraq and that troop levels and bases in Afghanistan will rise far above what Obama is now projecting. But Obama counts on them to keep their silence as he deceives the public on these devastating, costly, reckless ventures.
Read the rest, here.
Posted by JM at 2:42 PM

HOW TO PLUG THE OIL LEAK IN THE GULF OF MEXICO 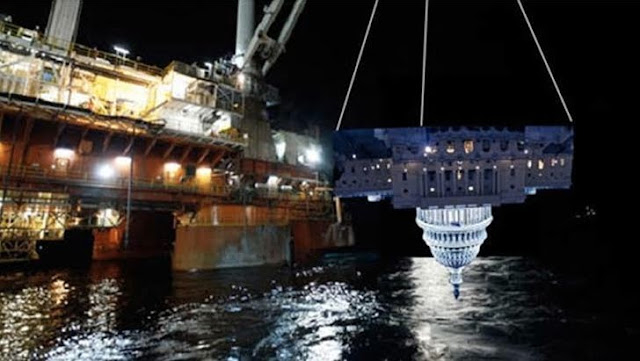