Anybody But Romney, But Who? 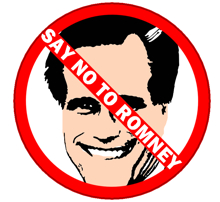 Jeffrey Lord successfully locates Romney squarely in the progressive wing of the Republican Party for The American Spectator here, but doesn't really explain how the supposedly dying wing of the party keeps getting its people nominated for president.
Not only that, Republican progressives dominate in the Senate, which can only mean one thing: Republican progressives owe their electoral success not to Republicans but more broadly to Democrats and independents who interfere in their primaries and occasionally vote for them in the general. The relatively small size and influence of the Tea Party in the US House underscores this point, despite its role in giving the House back to the GOP in 2010. Narrower constituencies elect representatives.
The way forward is for the Tea Party to narrow them further still.

Which is another way of saying the Tea Party needs to work for greater representation for the individual American's interests. What better way than by insisting on the originalist interpretation of the very idea of representation? The Tea Party should be demanding an end to a fixed House delegation of 435 members, a Republican fast-one pulled on the country back in the 1920s at the height of the progressives' influence. The Tea Party should call for expanding the House to its original constitutional proportions of one representative to every 30,000 of population.
I can think of no quicker, more sane and just way to wrest control of government away from the political parties as presently configured and return it to the people where it belongs.
We need 10,267 members in the US House.

And surely you know what that means? Instead of dividing 538 or so electoral votes to win the presidency, he or she would be fighting for a majority of 10,367 electoral votes. The growing and wildly disproportionate and unconstitutional electoral influence of the Senate since the 20s would thus be ended at a stroke because their 100 electoral votes would be up against 10,267 others, not just 438.

And so would be ended the Senate's ability and power to cram down our throats odious nostrums like Obamacare, gays in the military, START and any number of other progressive, enlightened ideas rejected by the vast majority of Americans.
Posted by JM at 8:13 AM